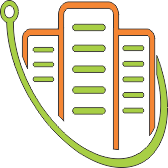 Every hosting company offers rDNS solution and the same we offer to our customer when they purchase VPS or Dedicated Server but what for those who just rent Subnets from OBHost?

I need rDNS Solution for subnets, If someone rent out x.x.x.x/24 from me then I should give him any portal where he can manage his x.x.x.x/24 rDNS him/her self, On regular basis we received many tickets only for rDNS Management of rented subnets.
I need this solution with cluster option as well so I should have cluster for Reverse DNS Server.

Paid or Free doesn't matter but must be well developed so the customers should relax and happy.